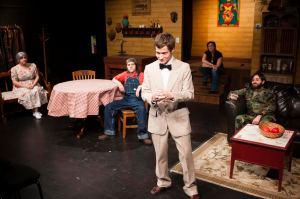 Whether it’s a comedy, a drama or a romance, one thing’s for certain: the Armstrong Masquers student theater troupe knows how to put on a good show.

May 1-4, under the direction of James Carroll, the Masquers will be performing “The Foreigner,” a comedy by American playwright Larry Shue. Carroll says he thoroughly enjoys the humor in the play.

“The reason that I picked ‘The Foreigner’ itself is because it’s not often that I read something and I laugh out loud while I’m reading it,” Carroll said.

The play will be performed in the Black Box Theatre with a never-before-seen set. According to Carroll, senior theater major Charles Norton will act as the technical director, creating the set for his capstone project. Carroll said that Hollywood flats and even a trapdoor are used in this new, exciting set.

“He’s [Norton] actually done a build-in in the Black Box Theatre, which normally we don’t do so he’s pretty much turned the whole thing into a fishing lodge including painted walls, his own work,“ said Carroll.

Amir Benveniste-Quezada, a senior history major, will be playing SSgt. “Froggy” LaSeuer. Quezada says he loves to act and can’t go one semester without auditioning for at least one play.

Carroll will be adding more comedic scenes and physical comedy into his play. He says he hopes that the audience will have a good time.

“Because it is set in Georgia I think there’s an opportunity to just kind of catch some jokes and stuff like that, that are there that you probably wouldn’t catch somewhere else,” Carroll said.

Tickets are on sale now at the AMT Box Office or online.