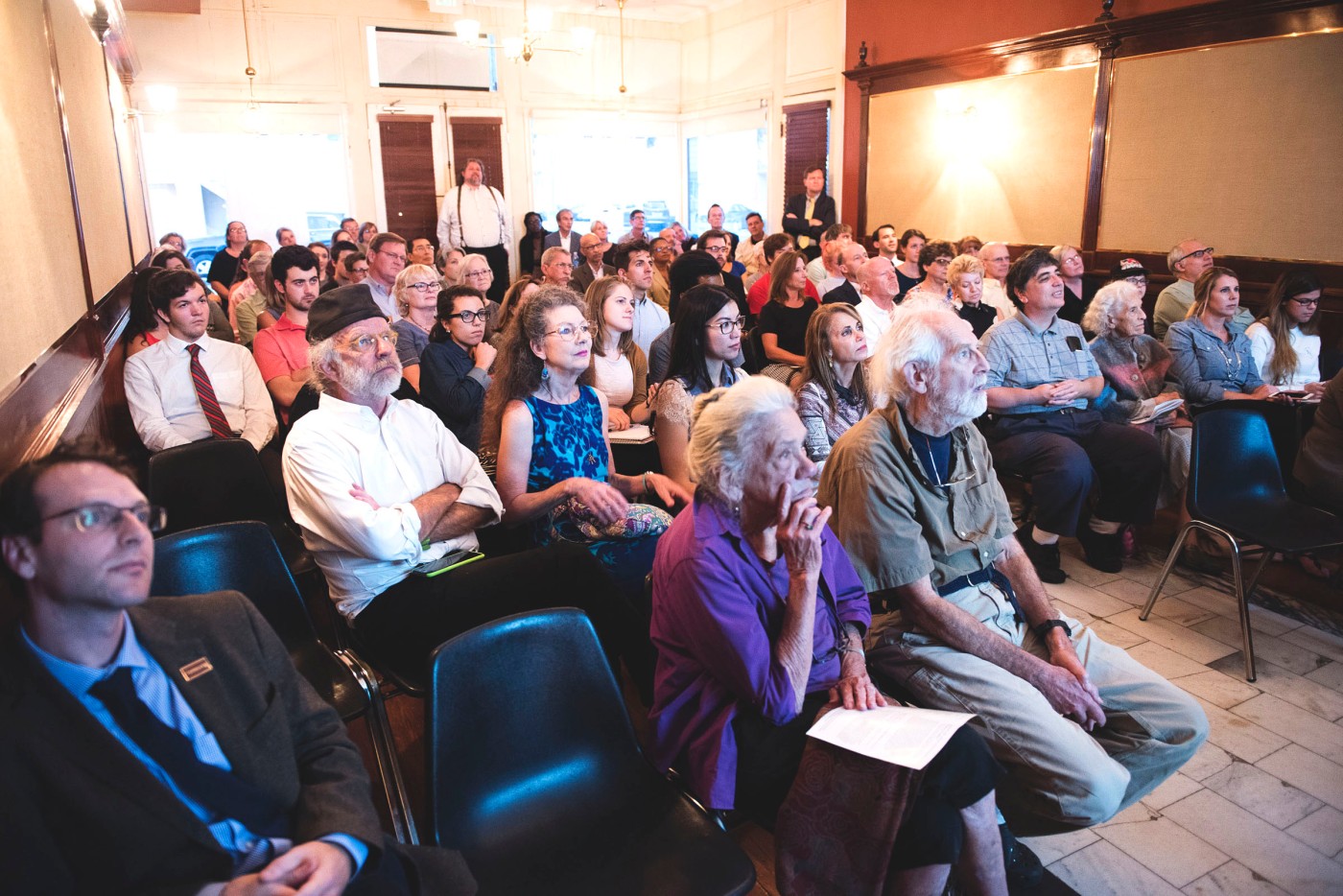 The lecture, “Grappling with Nuances: Political Contexts and Economic Platforms in the  2016 General Election,” was, by nature, a complex and tricky topic to discuss.

Dean of the College of Liberal Arts Dr. Christopher Curtis introduced the two speakers and jokingly posed the question “What if there are no nuances left?”

Dr. Nicholas Mangee presented his lecture first. His objective was to “communicate to you the competing economic platforms of our two candidates in this presidential election,” he explained.

“And the [proposed] policies […] often lack many important details upon which the degree of confidence in the forecast within analysis depends,” he added.

In other words, policies presented by both Hillary Clinton and Donald Trump—and almost every other presidential candidate—often lack thorough details in which analysts (particularly economic analysts) can make dependable and realistic forecasts in how these policies could potentially affect our country.

But, “to claim 5 or 6 percent,” which Trump later said could probably happen with his plan, “is terrible unrealistic.” Since World War II, Mangee explained, the annual world GDP has been around 2 percent.

In contrast, Clinton claimed to generate 10 million new jobs from 2016 to 2020; however, 7 million jobs will come from “current economic policies” already set in place. So, technically, she will only be adding 3 million more jobs.

Clinton plans to “increase the top tax rate to 45 percent and set lifetime gift tax exemption to $1 million,” meaning that you can only give away $1 million before being taxed. As for the middle class, Clinton has not yet set a plan in place for either a tax increase or decrease.

She asked the audience at the beginning of her lecture, “How many trust the media?” and two people from an audience of roughly 50 raised their hands.

She then asked how many people trust the government. Again, only two people raised their hands. From a historical perspective, she explained that we have a longstanding tradition of not trusting the government and that is why we have a Constitution in place to protect U.S. citizens.

Still, there is a growing lack of trust in government and media that is heavily persistent in this election cycle.

“In terms of the candidates themselves, there really are a lot of commonalities,” she said.

“I would argue that we are seeing some rather inflammatory rhetoric on both sides of the aisle. Granted, some of the language and some of the topics are more specific depending on which topic we’re talking about, but I’ve noticed in teaching these courses that I’m using language in my classes that I have not used in prior election cycles. And I’m seeing that on both sides.”

“We’re seeing a lot of dramatic rhetoric using big words like “always,” “never,” “gigantic” and “tiny” […] that puts the impression into our mind that we need to be on one side or another,” she added.

Wessel also covered the rhetoric of anger that she has seen on both sides but focused mainly on Trump.

“Among the Trump supporters, that anger seems to be more visible. Something to think about is where does that anger come from? And in general, stepping outside of political science for a moment here, but when people are angry, what’s that anger usually based in? Fear. There’s a lot of fear driving the rhetoric associated with this election. And you hear that fear in the form of anger as it is related to a lot of different policy issues.”

Wessel explained that Trump is proposing “serious change” such as leaving NATO, building a wall and improving the relationship between the United States and Russia.

“…These are big changes and big changes are popular among people who are angry and afraid that the world is changing in a way and leaving them behind.”

Wessel also discussed the typical order of factors which determine who people decide to vote for. Typically, party allegiance comes first, then the candidate image and finally, policy.

This is the most that Wessel has seen a general election focus on personal characteristics, such as the trustworthiness of Clinton and the temperament of Trump to the point where those characteristics outweigh policy.

“But I would argue that the outcome of this election is really only the first part of what we should be thinking about,” Wessel said near the end of her lecture. “…No matter who wins, there are some pretty serious problems to overcome.”

In her conclusion, Wessel left the audience with questions to ponder:

“Even though I already know who I’m voting for, I wanted to round out my knowledge and perspective of the [political] race,” he said. “I’m not too political. I know the general things but not the numbers,” he said. “I didn’t know quite the differences in tax policies so [Mangee] cleared things up.”

Battayani, self-described as a socially liberal but conservative voter,  will vote for Hillary Clinton on Nov. 8, but said he voted for former Republican nominee Marco Rubio, during the Georgia primaries.

The next installment of the Moveable Feast Lecture series will be Thursday, Dec. 8, at the Jepson Center. Dr. Regina Bradley and Angela Horne will present “Landscapes of Unrest: Visual Narratives of Environmentalism and Civil Rights in Photographic Stills,” a take on photography and storytelling.