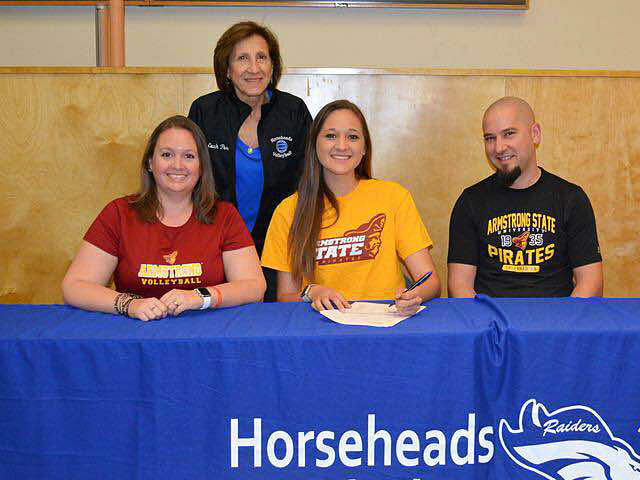 From Vancouver, Washington, freshman Autumn Mayo has been playing volleyball since the fifth grade. She chose to come to Armstrong State University because she values the one-on-one relationship a student can have with their professors, as well as the school’s “tight knit” sports community.

Mayo says she loves it here at Armstrong, and when asked if she plans on remaining a

Pirate, she said yes. “Of course I plan on staying at Armstrong,” she said, “I wouldn’t trade it for the world.”

Autumn is very happy with the amenities provided by the Pirate Athletic Center, and is impressed at our school’s dedication to our sports teams.

“One thing I love about this school is that the volleyball team has its own gym,” Autumn stated, “it’s nice when we want to come in last minute before a game and get some serving reps in and not have to worry about sharing a gym.”

On fan turnout, Mayo has been extremely pleased. “Fan turnout has been great! I would like to see us sell out the PAC for some games but right now, our fans that attend are so great and supportive.”

“I feel like the team has done great so far,” Autumn said. “We just need to pick off some more wins.”

Mayo has played extremely well this year, with 12 kills in three matches. 10 of these kills came from the Pirates 3-2 loss to Flagler last Wednesday, Oct. 26, proving that if the Pirates are going to go down, they are going to make it one hell of a challenge.

It certainly seems like Mayo is ready to take over for the Pirates volleyball team in the coming years. Whatever future matches may bring, the opposition better be on the lookout for number 17!