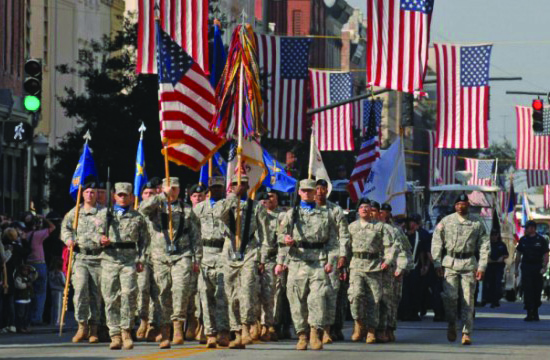 Between the kerfuffle of Halloween and the anticipation of Christmas, many people typically forget about another important holiday—a national holiday. Nov. 11 is Veterans Day, a celebration of the people, living or dead, that have fought for our country. With the Hunter Army Airfield and Fort Stewart not too far away, Savannah houses a large community of people and families that are affiliated with the military.

Armstrong alone has at least 1000 students that are involved with the military in some way. The Veterans Affairs Office and the Military Resource Center on campus are gearing up to celebrate Veterans Day both on and off campus throughout the week.

On Nov. 9, Veterans Affairs is working with Service Brewing Company on Indian St. to host a film screening of the documentary Blood Road at 5:30 p.m. The film is about mountain biker, named Rebecca Rusch, along with her riding partner, Huyen Nguyen, as they go along the Ho Chi Minh Trail to investigate the mysterious circumstances surrounding her father’s death who was shot down over Laos during the Vietnam War. The event will be free for all veterans and $15 for general admission. There will be food provided by Kayak Kafé, Vinnie Van Go-Go’s, Savannah Bee Company, ASI Yaupon Wellness Company Tea, and Coca-Cola. The food and drinks will be served from 5:30 p.m. to 6:30 p.m. with the film screening starting right after. Once the film ends there will be a panel discussion at 8 p.m. with the director of the film Nicholas Schrunk, Colonel Patricia Blassie, and Thomas Vallely from Harvard, who is an expert on Vietnam.

On Nov. 10 the Military Resource Center (MRC) and Veterans Services will be hosting a 242 Birthday Celebration for the U.S. Marine Corps at noon in the Pirate Athletic Center Room 115. There will be a cake cutting ceremony with punch provided and the event is free and open to all students and faculty.

According to Military Resource Center Team Leader Dustin Scott, “All veterans are welcome to participate with us and we have 50 free t-shirts for the participants. We will be using the usual pirate ship float in the parade. We will be meeting up at the Kroger on Gwinnett Street at 8:30 a.m. and we usually head out by 10 a.m. American Legion will be offering free lunch for veterans after the parade is over.”

The parade will also be broadcast live on WTOC and is free and open to the public.

Scott went on to say that he has pleased with the support for veterans in the community. “The level of support we have here is fine. The parade always has a huge turnout. The day of there’s always different activities that are offered around town. Plenty of restaurants usually offer discounts and free meals.”

Concerning the upcoming consolidation with Georgia Southern, Scott says nothing much will change. “MRC is funded by the school and the Student Veterans of America (SVA) is funded by fundraising so they’re not really going anywhere. More of the people at Southern that are part of the military are younger while here the student veterans are older. Their program is like what ours was a couple years ago. We were serving a fair amount of student veterans with only one small office in the MCC. Now we have expanded to a number of different offices in the Pirate Athletic Center.”

Come support your fellow students and veterans at the Veterans Day Parade!