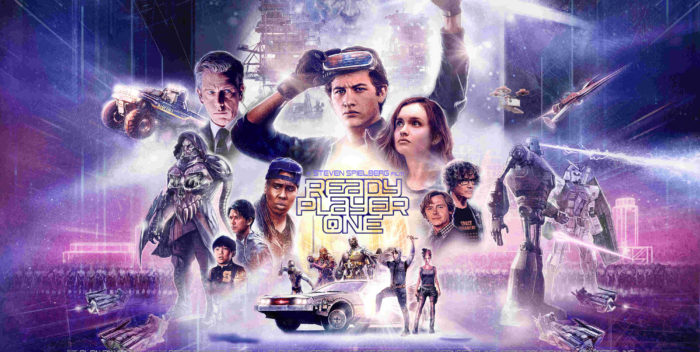 One of the greatest directors of all time, Steven Spielberg went back to his action-adventure roots with “Ready Player One,” which was released last weekend.

Spielberg usually manages releasing a new movie every year but the past few years they have been, apart from “The BFG,” drama or nonfiction pieces that get Academy Award attention. This film is more like the action-adventure movies he has done earlier in his career that made him famous, such as Indiana Jones, “E.T.,” and “Jurassic Park.”

“Ready Player One” is based on a book written by Ernest Cline about a future where an open-world virtual-reality game called the Oasis is the focus of everyone’s lives. When the creator of the game dies, a message from him is sent out to everyone saying that he hid three keys in the game and whoever finds them will get the final easter-egg and win complete control of the Oasis.

The film centers on teenager Wade Watts, played by up-in-coming actor Tye Sheridan, and his group of friends who try to find the keys before a well-known corporation gets to them first.

I’m going to go ahead and say I have not read the book, so I will not be making the debate of whether the book is better. I have read that Spielberg and other sources have said they wanted to go in their own direction with the material, so it is safe to assume there will be some differing concepts between the book and film.

I really enjoyed this movie. While the storyline was not groundbreaking or something I have not seen before in a film that centers on a hero’s journey, it was still commendable. I went into it simply expecting a fun film about a video game that includes a lot of pop-culture references and I was not disappointed.

The Oasis as a set-piece was great creative idea. It was so interesting to take in the environment as Wade’s avatar Parzival drove the Delorean from “Back to the Future” in races and hung out in clubs with Deathstroke and Harley Quinn. After a few minutes of watching a scene that took place in the real world, I was wondering when they were going to go back in the game, so I could see what other references popped up next. I already want to see the film again just to take in everything I may have missed the first time.

I will also say that all fans of the 1980 film “The Shining” need to go see this movie just for one sequence. The main group of characters look for one of the missing keys inside the film and the effects were incredible. All the scenes taking place in the Oasis were done with motion-capture and visual effects and it really looked like the characters were on the original film sets.

However, where the film excels in visual effects and dialogue, it lacks in character development. While main character Wade did have a backstory, he did not really have much to overcome. Since the quality of life in the real world kept going downhill, people were using the Oasis as a more extreme form of escapism and the message of the film was face reality and don’t have your life revolve too much around entertainment. I don’t think Wade really changed that much or learned how to face reality.

The antagonists of the story, a CEO played Ben Mendelsohn and his head of security played by Hannah John-Kamen, also seemed very one-dimensional. They were very dedicated to their jobs and wanted to find all the keys by any means necessary, so they could control the Oasis and have all the power. The Oasis is the focal point of everyone’s lives so from a business standpoint it makes sense because that’s where all the money is. Their characters just didn’t have much else to go off apart from that and it’s something you have seen in countless movies before.

Overall the movie is still worthy of praise. If you don’t go into it expecting a masterpiece and just want to have a good time, you will enjoy it. So, for those of you who are interested in video games, the 80s, or pop-culture in general, go check out this movie! Because who doesn’t want to see the Iron Giant, Lara Croft, and King Kong all in the same place?

“Ready Player One” is now in theaters nationwide.

✨ UPDATE ✨ A message from our Editor-in-Chief, Jason Chapman, on what to expect from your friends at the Inkwell as we work remotely for the rest of the semester! https://wp.me/p4wcZv-3PN
As you all know now, our university will be closed for two weeks starting Mar. 16. We will be posting stories over the course of this suspension via our website http://theinkwellonline.com. Be sure you are also following our Facebook and Twitter for more news and updates. Stay safe, everyone! Remember, wash yo hands! 🦠
How are you tackling your Monday? Or should we say.. Memeday? 👉🏻👉🏻
🔥 HOT OFF THE PRESS 🔥 What’s the word? Find out today! Grab your copy at the nearest Inkwell booth now!