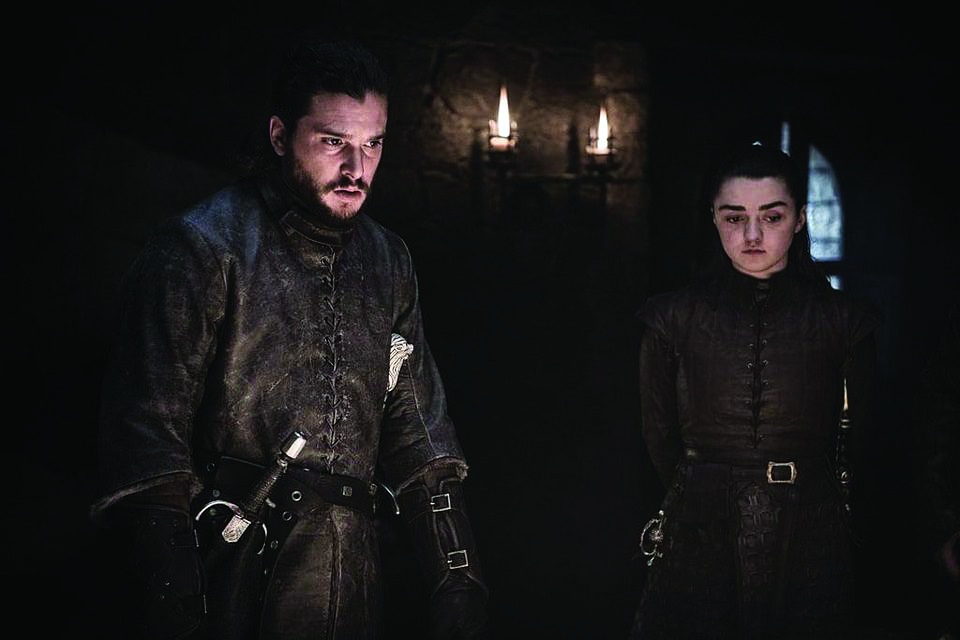 The Battle of Winterfell is upon us and it is going to be interesting. Here is your season 8: episode 2 recap of Game of Thrones with some opinions sprinkled in as usual.

Jaime arrived in Winterfell to conclude episode one and was immediately questioned by many people who have been impacted by his decisions through the shows duration, including Dany, Sansa, Jon, Brienne and others.

Brienne of Tarth basically saves Jaime by pleading with Sansa and Dany, saying that he is noble and wants to fight for the living and not against the North, leading the North to invite Jaime and later Theon Greyjoy to join the fight ahead.

Bran also hit Jaime with “The things we do for love.”, the same line that Jaime spoke before he pushed Bran out of the tower in season 1. Jaime later comes to find that Bran never told anyone about the incident as well.

The Gendry and Arya tension continued as she wanted to know what sex felt like before imminent death comes in the form of the Night King. They have sex, which led me to remember when Sansa and Joffrey were put together by Ned Stark and Robert Baratheon.

By technicality, Gendry is a Baratheon and Arya is obviously a Stark, so that could be interesting to follow throughout the rest of the season.

Much of the episode targeting Tyrion, Jaime, Brienne, Ser Davos, Podrick and Tormund and their conversation ahead of the Battle of Winterfell.

Tormund has arguably one of the funniest stories to tell in television history, explaining that he gained his nickname from killing a giant when he was 10 years old and sucking the teat of his wife who thought Tormund was her son. Just an amazing moment in the show that will be remembered for years to come.

Earlier in the episode, we come to find that Brienne will be manning the left portion of the battlefield and during the conversation with the six characters, Jaime knights Brienne, making her Ser Brienne of Tarth and a Knight of the Seven Kingdoms, becoming the first woman to do so.

Sansa and Dany also had their first conversation one-on-one and to say things were intense would be an understatement.

Sansa questions Dany’s plans for the North following the war with the White Walkers, exclaiming that “The North will not bow to anyone else again.” This led to Dany and Sansa being interrupted and meeting with Theon, who saved Sansa at one point and pledged his allegiance to Dany.

The confrontations between Sansa and Dany will be interesting to follow as the tension between the two build. The two never got on good footing from the get-go and family allegiance could play a major role in how the two interact and make decisions to decide each other’s fate.

The Night’s Watch had a bit of a reunion as the group had a conversation ahead of the battle, making jokes and bringing back some old memories.

The episode’s conclusion was nearly identical to episode one. Dany finds Jon in the crypts of Winterfell ahead of the fight and Jon cuts to chase, exclaiming to Dany that he is indeed Aegon Targaryen and the rightful heir to the throne.

Why does this matter? Because Dany is actively attempting to seize control of the Seven Kingdoms, yet her lover is the rightful heir to do so.

The two were interrupted by a war horn, signifying that the Night King and his undead army are close and approaching quickly. Tyrion overlooks the battlefield, much like he did when King’s Landing was under attack and the camera shifts to the Unsullied Army and Winterfell preparing for battle.

The White Walkers feast their eyes on Winterfell and the gloomy night sky overlooks the distance between them and Winterfell, preparing us for arguably the biggest fight in the show’s history.

Thoughts and comments on this episode and what may happen in the Battle of Winterfell?

Come see us at our table on Thursday or tweet us @InkwellGSU.