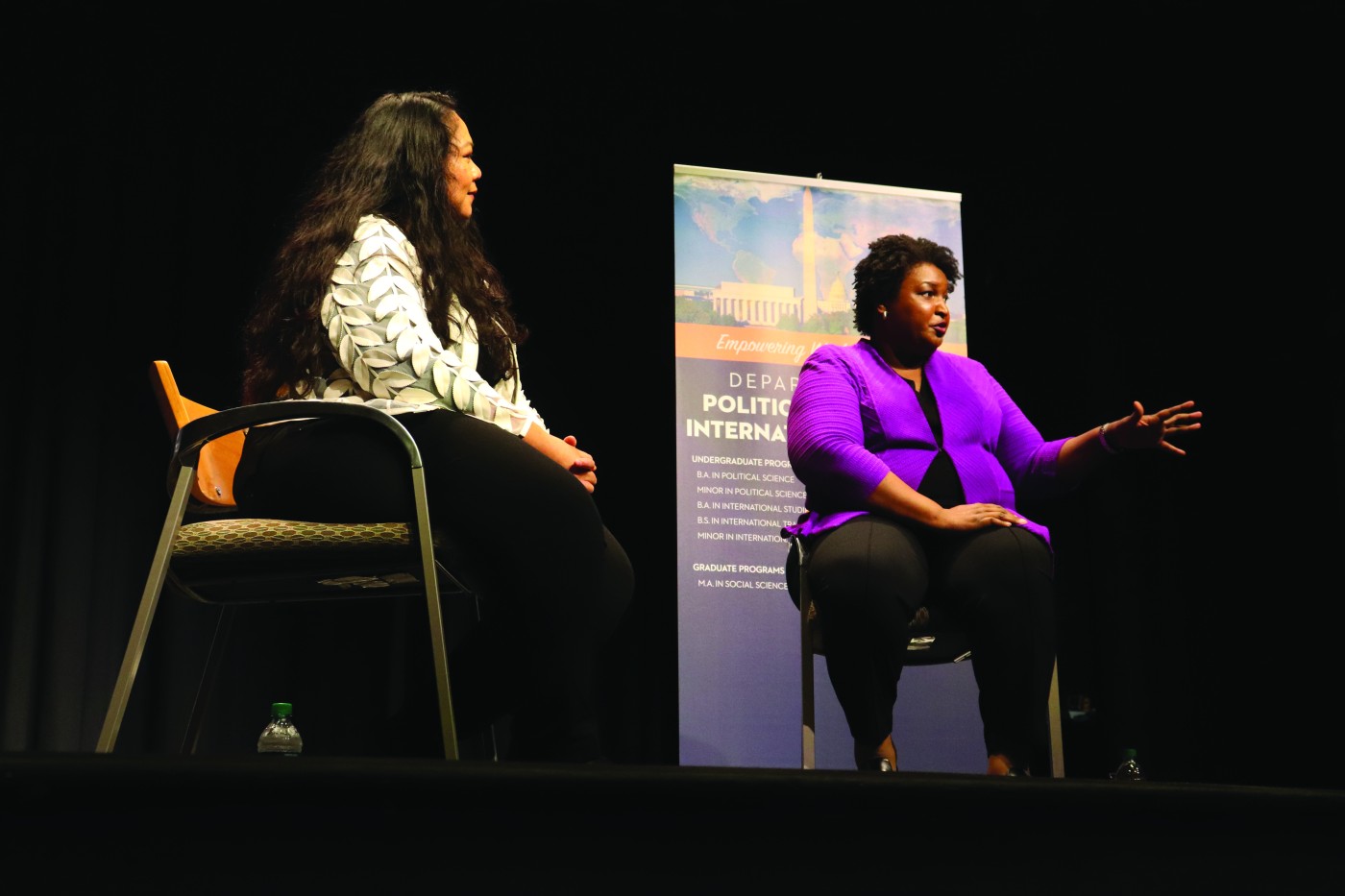 As part of National Voter Registration Day, previous Republican politician Lynn Westmoreland came to speak to Armstrong about leadership skills, the importance of voting and the intricacies involving bipartisan politics.

Westmoreland talked about his lack of college education and offered some cursory advice, “Get your education. Listen to what they’re trying to tell you… they’re telling you things you’re gonna need,” he said.

Westmoreland has worked in politics for 24 years and mentioned that he believes “the family is the fabric of our society.”

“This whole arena of government needs to be about the people it serves.” – Lynn Westmoreland

He went on to talk about his conservative values and how making laws and creating bills works. He would ask himself: Does it make sense? Does it increase the [overall] cost?

“There’s not a perfect bill. What you have to do is take those things you’re committed to, your core values, and move the ball towards those values,” he said. He then used a football euphemism to talk about the current state of politics.

“In politics today, everybody wants a touchdown in every play… [now we have these] extreme policies that make it ridiculous for compromise…we’re elected to serve people, not carry out a mission,” he said.

Westmoreland encouraged students to get involved, register to vote and find a candidate they agree with. He opened the floor for questions after closing with the following statement, “this whole arena of government needs to be about the people it serves,” he said.

During the question and answer portion, polarizing politics was a topic more than once. Westmoreland compared governing to eating “bad sandwiches” and that the “american people have become consumed” by overzealous, 24 hour media coverage.

A member of the crowd asked him for clarification about one of his previous statements that, “if you’re in the minority, vote no and complain.” A woman asked him, “why would you say that?”

“What I meant by [that], is that it’s easy to be in the minority because you don’t have to govern. Look I’m not a hero, don’t take anything from me, but I served 12 years in the Georgia House [of Representatives] and 12 in Georgia Senate, I term limited myself. Everybody’s got a shelf life. Some of the people in washington have been there a long time…” he said.

Another crowd member asked about bipartisanship and if the U.S.’s current political system could ever “meet each other halfway.”

“It’s tough to get to the center without alienating the people who voted for you,” he answered.

Georgia Southern’s Department of Political Science and International Studies invited Stacey Abrams to Armstrong to shed light on the importance of voting.

Abrams was greeted with a standing ovation from a very diverse crowd. Students, faculty and Savannah residents filled the seats.

Abrams’ encouraging words and fun, joking spirit made the audience feel like they were in the presence of family rather than a politician.

You know I care about voting. Sometimes it works sometimes it doesn’t.” – Stacey Abrams

Abrams began with explaining to the audience why she works as hard as she does. Coming from a lower- than-middle class household, she explained that she had to always be doing something. “You have to be willing to change your mind to get to where you’re going. Work, life, balance is a lie, you have to embrace fear.”

Before opening up the floor for questions Abrams shared a story from her past.

She began with the assertion that by being a first-generation student Abrams explained how she was her family’s “way out.”

Abrams then explained the story of how she bought a tv with a credit card. The television was originally $199, but because she was unaware of how credit worked she ended up paying $12,000 on the credit card. “You can make mistakes but they won’t diminish you. Everything is a lesson.”

Duirng the question and answer session, one student in particular asked what Abrams thought about polls not being accessible for the non- accessible. Abrams was aware that polls have been closed because of that very reason.

The main concern was that communities were using the non-accessibility as a gateway to close particular locations but not reopening them and making them accessible which was making it harder for residents to vote.

Another student went on to ask about political parties. “Why can’t politicians just focus on the people? Not whether a person is a Republican or Democrat.”

Abrams reply was, “Do you like pizza? What’s your favorite kind? If I bought two kinds of pizzas to a party but only offered you the one you didnt like wouldn’t you find a way to get the pizza your originally wanted?”

The crowd laughed and agreed.

Abrams was so moved by the students question that she asked one of her representatives to talk to the student about establishing one of her many  “Fair Fight” organizations at the Armstrong campus.

According to the Fair Fight website, the organization was created to encourage voter participation in elections and educate voters about elections and their voting rights.

Abrams was excited to say a chapter was being set up at the Armstrong campus in the near future.

After the questions were answered Abrams wrapped up the speech with information about her book. A “tell all or how to guide if you will”.

The book is an exploration of what she’s gone through to get to where she is, how to embrace fear, making voting accessible, and the power of leadership.

Once everyone gave Abrams her round of applause. She was asked about a recent rumor of running for Vice President with Joe Biden.

Abrams informed the audience that she was having lunch with a friend who just so happened to be Biden and has no recollection of ever saying she will be running for Vice President.

“If given the opportunity to run for VP would you turn it down?” was the last thing Abrams said which made the audience erupt in laughter. Bringing the event to a close.

The Political Science and International Studies department hopes to get the Fairfight.org project going on this campus as soon as possible.